Obscene Art - Why Painting Must Have More Artistic Value Than Film 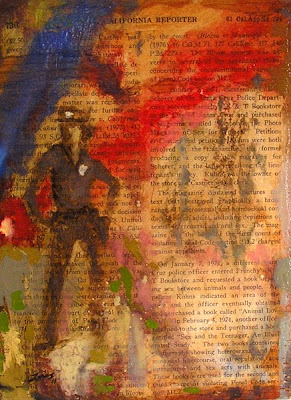 Artists are constantly questioning what art is. There is no satisfactory definition. Art could arguably be the juxtaposition of someone's roadkill on the highway. So what the heck is the definition of art in the law?

The newest edition to my "obsolete law book" series, this painting incorporates a Court of Appeal decision from 1976, People v. Kuhns, about the criminal prosecution of a man selling obscene material at his adult video store, in violation of California Penal Code. The obscene material was discovered through law enforcement investigation, when police officers in Santa Cruz entered the store and purchased it.

But the obscenity statute is vague because it inevitably must be balanced against the First Amendment right of free speech. The courts have attempted to define obscene material as applying to: "works which, taken as a whole, appeal to the prurient interest in sex, which portray sexual conduct in a patently offensive way, and which, taken as a whole, do not have serious literary, artistic, political, or scientific value."

Pressing the idea that anything the artist produces is art, the past hundred years have embraced a broader, more inclusive assessment, where just about anything has been accepted as art. This concept developed with the Dada Art Movement beginning around 1915. It involved probing the boundaries of art and taunting artistic conventions, and it was one of the primary goals of Dada to avoid the labeling and legitimizing of the artistic establishments. André Breton said, "Dada is a state of mind... Dada is artistic free thinking... Dada gives itself to nothing.” Probably the most notorious artwork associated with this idea is The Fountain by Marcel Duchamp, a readymade urinal he signed, dated, and called "art".

If Duchamp could place a readymade urinal in a gallery in 1917 and pass it off as art, imagine how far artists have explored this idea since then: a naked doll is wrapped in barbed wire and placed in an art gallery; a man films himself tumbling off a roof; a woman paints a portrait of herself performing sex acts with an animal.

If the woman had filmed herself instead of painted, would her work then lack “serious artistic value”? If so, wouldn’t that mean that painting has inherently more artistic value than film? I know many people who would take issue with that!
Posted by Lucas Novak at 12:34 PM