Doodle of the day 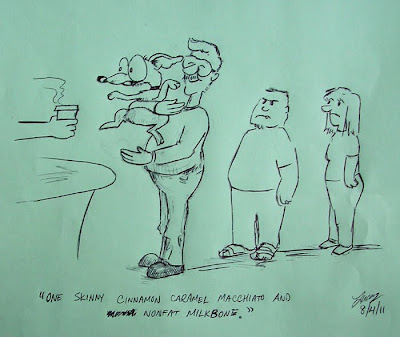 This is a doodle of the weird guy at the coffee shop this morning. He looked funny with his funny-looking mutt. Squeezing his pooch close to his breast, it appeared as though the dog was ordering the coffee. This little scene, if you would even call it that, was just a fraction of my day -- it occurred in a flash, like the random appearance of a bird in the sky, and then he was gone and I was on my way. But the image stuck in my head and morphed into characters not unlike those in Family Guy, The Simpsons, or The Far Side.

Later during my lunch break, the image still lingering, I scribbled this doodle. It was created using a standard No. 2 pencil and a bic pen.
Posted by Lucas Novak at 7:12 PM