Doodle of the Day - Gettin' the Week Started... 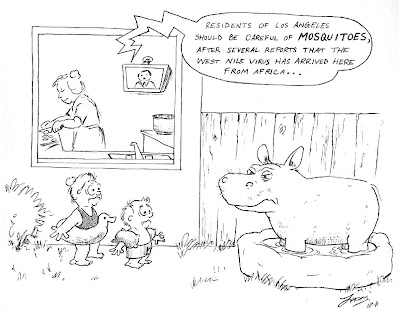 It's Monday and time to doodle again :)

The weather in 2011 has been unreal. From hurricanes in New York to massive floods in Mississippi, flocks of birds have been falling from the sky and schools of fish have been washing up on shores. Maybe the Mayans had it right about 2012! (Aside: make your sacrifice to the Heavens today by clicking the "Donate" button on this page and following the easy 1-2-3 steps.)

Yesterday in Los Angeles it felt like hell. The temperature reached 110 degrees. I also heard on the news that the West Nile Virus has reached the city. But the newsman also said that the virus is not as bad as its reputation makes us believe. I always thought West Nile Virus was a disease like cholera or dysentery that would consume you from the inside out. Not so. Apparently, it's like the common cold or flu, most people survive, and some people don't even get sick! See, there IS good news after all!

You can click on the image for a better view. Have a great week. Thanks again for viewing the daily Doodle of the Day and the paintings, drawings, sculpture, and art of Los Angeles artist Lucas Aardvark.