A Critique of Peter Doig 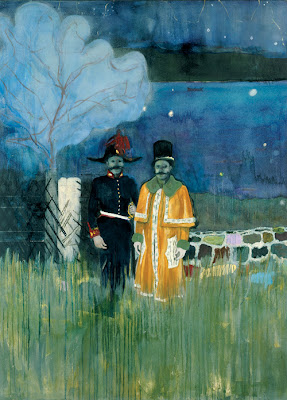 A contemporary artist alive today influencing me with his paintings is Peter Doig. A reason why his work is influential is because he incorporates the abstract with representational subjects, often referencing established artists in history such as Klimt and Mondrian, and putting the emphasis on color and HOW each work is painted, not why it was made or what the subject matter is. For example, the painting above is a dark picture of green-faced men in costumes, yet it is the way the picture was made, i.e, rich blotches and colors dripping with an "unfinished" quality, a ghost-like tree, and contrasting yellow-orange against a midnight blue with an accent from a lavender stone, that makes it interesting. It is peculiar why these men are standing in the field in the evening, their faces green, in front of a rock wall -- aspects remain ambiguous, capturing the viewer's attention by prompting questions.

Born in 1959 in Edinburgh, UK, Doig lived in Canada (nice!) for a good portion of his early years, and it is probably from this experience that directed him to create many paintings referencing the outdoors and derived from landscapes. Art critics have sometimes criticized or given him criticism for representing nature with abnormal colors, such as painting deer red. But his appoach to representing simple subjects is unique. The picture below is a simple subject which appears to be a person perhaps skating on a frozen pond in winter. We don't really know much about this person other than he is alone. And even though the scene is a white winter, the painting nevertheless teems with color through reflections and splotches.

Should Mr. Doig ever read this blog post, critique, or whatever you call it, I declare to him that I shall one day have a painting of mine on the same wall as his, for viewers to decide which one they like better! 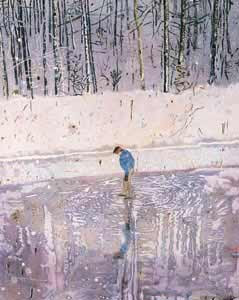