Review of an Inspirational Painting - Picasso's Woman of Majorca 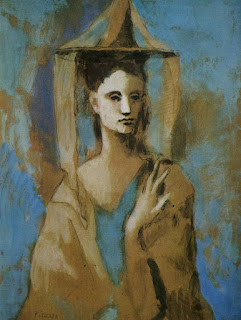 Every so often I come across an inspirational painting. This time I was struck by Pablo Picasso's Woman of Majorca, pictured above. He painted it in 1905, when he was 24 years old. Exactly 100 years later, I was 24 years old, and part of the intrigue for me anytime I view a painting by Picasso is to look at the date of creation and dare to compare what he accomplished at my age.

I'm not trying to be Picasso, nor do I have the arrogance to think I have his level of artistic talent, but sometimes I do come across a piece of his work, realize I have 5 or 10 or 20 years to create something just as good, and get a boost of confidence that yes, it can be done - Picasso was not a god; he was just a man. But in the case of Woman of Majorca, Picasso's mastery is clear, and attempting to describe such mastery in words is probably futile, even if your name is William Faulkner.

Certainly there are art historians, professors, and critics who can write an academic informative review of Woman of Majorca, theorize about why Picasso chose this subject matter, while comparing his transition from the "blue period" to the "rose period" at this time of his life. I don't plan to do that, and I'm sure Mr. Picasso didn't sit down one day and say to himself, "Today I'm beginning my rose period, so now my palette needs to look like this..." He just painted what felt right. So I will attempt to articulate why it feels right to me. 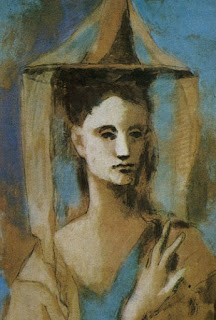 Woman of Majorca resonates an ambiguous, mysterious quality. It doesn't matter that the subject matter is simply a portrait of a woman; perhaps the simplicity of the portrait adds to its mysteriousness, similar to the eroding ancient Roman, Greek, Egyptian, Pre-Columbian, and Asian sculptures. Her eyes reveal nothing, as they are just black ovals devoid of any white, yet the eyelids are relaxed and seem to alleviate any evilness that might otherwise be conveyed by black eyes. The ambiguity in her face is further demonstrated by its relative flatness in neutral color, with minimal modeling, wrinkles, and lines. And although this ambiguity risks being dismissed as a boring lack of detail, Picasso frames the face with a hat on top, veil on the sides, and V-neck and hand from below, to remind the viewer that the face is the focal point - to encourage the viewer to keep studying it because there is more to be discovered.

The sketchy quality, angular shapes, and lack of refinement reveals Paul Cezanne's influence on Picasso. And it seems to me that Picasso had probably seen a woman in town, a stranger or an acquaintance, and as he was inspired by a momentary glimpse of strange melancholy, he later returned to his studio to recreate her from memory - details clouded and ambiguity conceived, as he sought to quickly convey his feelings to the canvas.

Picasso applied the paint in a deliberate confident way, unconcerned about photorealistic qualities. And the ambiguity creates timelessness because it is a nonspecific woman with an obscure gaze; we don't know what she is thinking. We cannot understand her. Yet the painting is somehow inexplicably human. Like the Mona Lisa.

Apparently, Woman of Majorca was simply meant to be a study for a figure to be included in a much larger painting: Les Bateleurs, also created in 1905, depicted below. As you can see, the woman in the bottom right is in a very similar pose. While both paintings still present a level of melancholy, I feel that the masterful impact of Woman of Majorca is lost in her representation in Les Bateleurs, albeit she is not the primary subject. I must also add that my judgment of Les Bateleurs is limited to my perception of its reproduction as an image on a computer screen, certainly an adulterated experience when the size of the actual artwork is an enormous 83" x 89". 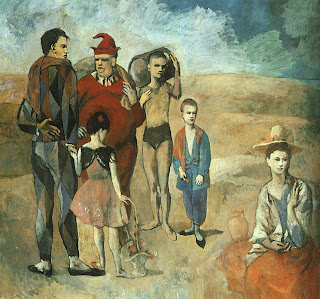 Thank you for reading about the paintings, sculptures, drawings, works in progress, reviews, Doodle of the Day, and other art by Los Angeles artist Lucas Aardvark Novak. To see older blog posts and other doodles, click HERE :)
Posted by Lucas Novak at 7:45 AM