New Work, the Word "Artist", and the Jack White Inspiration 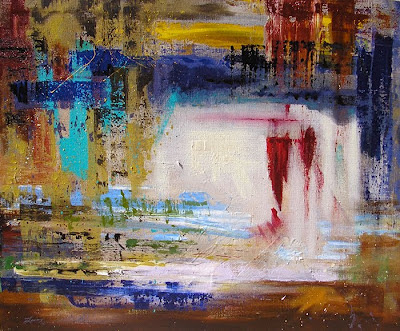 For years I have struggled to comprehend exactly what an artist is. Anything can be considered "art", from scrawling the word "R. Mutt" on a urinal, to someone's roadkill on the highway. You can videotape yourself walking around and around in a circle wearing nothing but baseball pants and a feather cap and suddenly be the next great performance artist. Picasso was an artist. Beyonce is an artist. Milli Vanilli won the "Best New Artist" Grammy Award even though they were singers who apparently lip synched lyrics written by other people. The employees of Subway are called sandwich artists.

Last week I happened to be struggling with the word artist again, commenting to my brother that people so freely toss that word around like it's nothing. The overuse of the word threatens to strip it of all meaning.

The next day, however, I was in Vancouver, Canada, and coincidentally came across an article about Jack White and his new album, Blunderbuss. Written by Mike Usinger for the Vancouver weekly newspaper, The Georgia Straight, the article, and particularly White's quotes, hit home - an inspirational perspective to remember...

White says: "I get bored with the idea of being complacent. I feel a responsibility - not really a guilt, but responsibility - to the word artist. That's a heavy, heavy word to say out loud, to even think of yourself as an artist. A lot of people throw that word around. If someone who's 80 years old comes up in an airport and says, 'What do you do for a living?', if I have the gall to say artist, instead of musician or producer or whatever, I'm really going to be responsible to that word - it's not an excuse to not work."

He adds: "So I push myself. I gave myself over to it a long time ago - gave myself over to not having a normal life or a normal experience, to not coming home and sitting on the couch and watching TV at night. I don't get to have that. That was the sacrifice. But the good things that have come from that, the experiences and the things that have been created that didn't exist before, I owe a lot of respect to."

Thank you for reading about the paintings, sculptures, drawings, works in progress, reviews, Doodle of the Day, and other art by Los Angeles artist Lucas Aardvark Novak :) To see older blog posts and other doodles, click HERE.
Posted by Lucas Novak at 7:30 AM