Doodle of the Day - The Life Aquatic 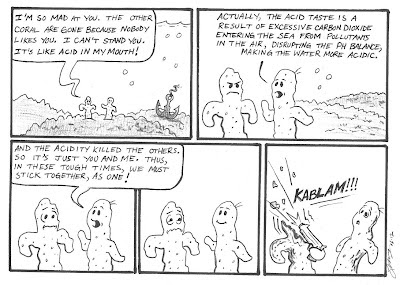 Every artist needs nature. Yet I have mixed feelings about the "going green" trend, not because I am skeptical about environmental perils or global warming, but because so often it is referred to as a trend. A trend implies that it is something socially popular now, but in time will pass as it gradually becomes uncool, like wearing Airwalk shoes, or following 'N Sync, or having a mullet haircut.

Going green, to me, is not a trend to be followed by some, but a necessary movement to include all. I recently watched a documentary narrated by the great David Attenborough about the world's oceans and it was informative but depressing because the outlook is grim, many significant fisheries may collapse by 2050, and the oceans affect everything, including the air we breathe.

For example, approximately one quarter of coral reefs around the world are already considered damaged beyond repair, with another two-thirds under serious threat. (See: http://wwf.panda.org/about_our_earth/blue_planet/coasts/coral_reefs/coral_threats/.) A significant threat is ocean acidification. (See: http://www.coral.org/resources/about_coral_reefs/threats_to_coral_reefs.) Some people may wonder why we care about coral reefs anyway. But aside from their beauty, coral colonies are the backbone of oceanic ecosystems and directly affect not only fisheries and our food resources, but support the life of tiny creatures and plants called phytoplankton which contribute between 50 to 85 percent of the oxygen in the Earth’s atmosphere. (See: http://earthsky.org/earth/how-much-do-oceans-add-to-worlds-oxygen.)

Hopefully, we as a global community can continue to address these environmental concerns, implement resolutions, educate younger generations, and realize that the green movement is not a trend, but a requirement.

Thank you for reading about the paintings, sculptures, drawings, works in progress, reviews, Doodle of the Day, and other art by Los Angeles artist Lucas Aardvark Novak. To see older blog posts and other doodles, click HERE :)
Posted by Lucas Novak at 8:30 AM