So What The Hell Is "Fair Use" Anyways?...Patrick Cariou v. Richard Prince...The Saga Continues...

The decision is out: 25 of the 30 artworks by Richard Prince make fair use of Patrick Cariou's photographs. The remaining 5 works were remanded to the District Court to apply the proper legal standard and make a determination whether they also make fair use of Cariou's photos. Such is last month's ruling by the United States Court of Appeals for the Second Circuit.

To recap the debate: internationally renown contemporary artist, Richard Prince, appropriated Cariou's photographs of Rastafarian people (without Cariou's permission) in transforming the photographs into artworks of a different feeling. The District Court (lower court) found Prince (and Gagosian Gallery) liable for infringement of Cariou's copyright interests.  The following image, for example, shows a photograph on the left by Cariou; on the right, Prince's appropriation of it, a work which sold for about a million dollars: 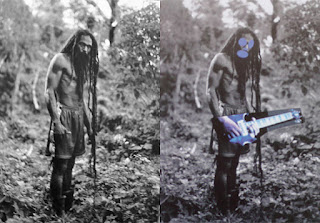 To put it into perspective, imagine that you took a photo of your friend, the man on the left. Then, without your permission (and without any compensation of course), someone used that photo and transformed it into what is depicted on the right, changed the size, and sold it for a million dollars. Copyright infringement or fair use?

Of significance is that the above example is one of the five artworks in which the Circuit Court did not make a determination because I suppose it was too much of a close call. All of the artworks at issue can be seen here: http://www.ca2.uscourts.gov/11-1197apx.htm. And the Circuit Court's opinion can be found here: http://blogs.library.duke.edu/scholcomm/files/2013/04/138475739-Cariou-v-Prince-2nd-Circ.pdf

Here are a couple examples of Prince's pieces found to be fair use (the appropriated photographs of women are not Cariou's, and I'm not sure whose they are -- if they're yours maybe you should join this lawsuit):

Whose rights should prevail? I foresee that the Circuit Court's holding is not final, and the case will now (in due time) be heard by the United States Supreme Court.

The purpose of copyright law is "[t]o promote the Progress of Science and useful Arts . . . ." U.S. Const., Art. I, § 8, cl. 8. And as the Circuit Court noted, "[C]opyright is not an inevitable, divine, or natural right that confers on authors the absolute ownership of their creations. It is designed rather to stimulate activity and progress in the arts for the intellectual enrichment of the public...[The] fair use doctrine mediates between the property rights copyright law establishes in creative works, which must be protected up to a point, and the ability of authors, artists, and the rest of us to express them -- or ourselves by reference to the works of others, which must be protected up to a point." (A more incontrovertible example of fair use is me posting images of Prince's work on this blog.)

The concern I have with the Circuit Court's ruling, however, is that the judges themselves concluded what was fair use versus what could be copyright infringement. The Circuit Court heard the case on a review of a summary judgment motion. In the law, a judge may grant summary judgment when there are no disputes of material fact but only disputes regarding issues of law. If there are triable issues of fact (such as a dispute whether a traffic light was red or green), then it is up to a jury to decide.


In this case, the judges are aware of this, but they state: "Although fair use is a mixed question of law and fact, this court has on numerous occasions resolved fair use determinations at the summary judgment stage where . . . there are no genuine issues of material fact. This case lends itself to that approach.”

What the Court fails to explain is how "this case lends itself to that approach." While I don't necessarily disagree with the Court's conclusions, the way I see it, this entire case is a dispute of fact. This fair use inquiry rests entirely on aesthetic perceptions, artistic opinion and expertise, conceptual value of the works at issue, and artistic and scientific evaluations of how the copyrighted works were transformed, while relying on testimony of witnesses and experts -- all issues of fact for a jury to decide! Isn't that why there is such a thing as juries?

One outstanding part of the Circuit Court's opinion, however, is its rejection of the District Court's order that the defendants (Prince, Lawrence Gagosian, and Gagosian Gallery) deliver Prince's artworks to Cariou for their destruction. Even Cariou agreed that destruction of Prince's work would be against the public interest. Good! The very nature of this dispute has made all of the artworks museum-quality stuff.

(Notably, it appears several museums, including the Art Institute of Chicago, The Metropolitan Museum of Art, MoMA, and LACMA, filed amicus briefs offering information as nonparties to the case because of their serious interest in the outcome.)

What remains unfortunate, especially for us artists interested in knowing how far our copyright extends, or how much we may appropriate from others, is that the line remains a giant haze: competent courts, such as the federal district court and circuit court in New York, can completely disagree.

Thank you for reading about the paintings, sculptures, drawings, works in progress, reviews, Doodle of the Day, and other art by Los Angeles artist Lucas Aardvark Novak. To see older blog posts and other doodles, click HERE :)
Posted by Lucas Novak at 8:00 AM