Critiquing the Work of Chuck Close 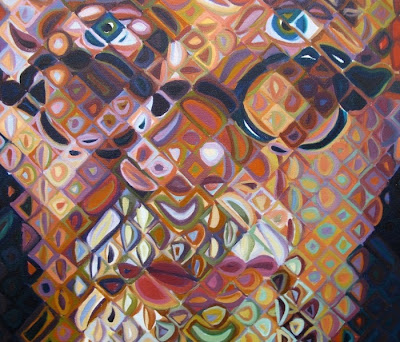 Dare I criticize the paintings of Chuck Close? He is probably one of the most famous American painters alive today. But in my lifelong quest to reach artistic greatness, I must study the work of established artists, and in doing so, sometimes I feel the need to write an independent review of their art, in an effort to better understand it.

The above painting is an example of Close's recent work currently exhibited at Blum & Poe Gallery in Culver City, one of the most reputable galleries in Los Angeles.

Now in his 70s, Chuck Close earned his MFA from Yale University, was awarded the National Medal of Arts from President Clinton in 2000, and has his work in the permanent collections of museums worldwide, including the Art Institute of Chicago and the Museum of Modern Art, New York.

In 1988, he suffered a spinal artery collapse, suffering a seizure which left him paralyzed from the neck down. Over time and through rehabilitation, he regained movement in his arms, but not his fingers. He developed the ability to continue painting with a brush strapped to his wrist, but he has been confined to a wheelchair ever since.

His ability to overcome "the event" is certainly an accomplishment in itself, but his ability to continue creating art demonstrates his enormous passion for it and exemplifies the necessity of art in human life. A good PBS interview with him can be found HERE.

As the life story of Chuck Close will likely remain in art history books of American artists for centuries to come, and while purchasing his work may prove to be a solid investment, his 2011 work currently on display at Blum & Poe deserves an independent review:

The following is an image of his painting entitled Lucas, created in 1987, on display at the Metropolitan Museum of Art in New York. I am particularly intrigued by this painting, not because of its title!, but because it was one of the first of its style, a monumental scale portrait using a Seurat-like pointillist technique, and marking Close’s departure from hyper-realistic painting. It was created in a style similar to the above self portrait, but because it stands over 12 feet tall, this is what it looks like from far away: 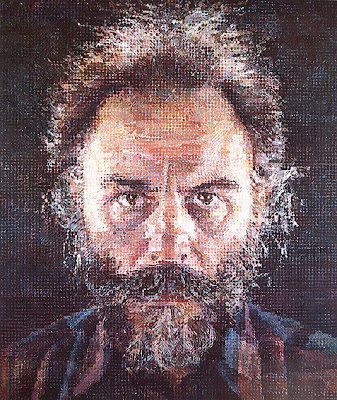 To create these portraits, Close takes photographs of his subject, then draws a grid over the photo. Next, he formulaically reproduces the contents of each tiny square on a magnified scale, by applying dots, dashes or short strokes of pigment. Viewed close-up, the painting looks like a series of abstract markings within separate squares, but from a distance, the markings form the illusionistic portrait.

A similar effect was demonstrated in the work of Georges Seurat in the 1880s, when the term pointillism was coined, represented in this detail from La Parade: 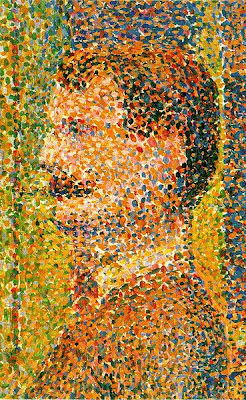 These ideas are related to the pixel element in digital imaging. Pixels are combined to create images the we see on computer screens, and derived from this process are creations of digital images like the following, which I call “digital pointillism”: 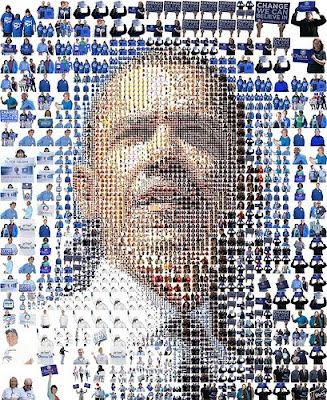 With the recent advent of new media, digital imaging has flooded our lives, including thousands of variations of images created from “digital pointillism”.

So, when viewing Chuck Close’s recent work at Blum & Poe, although the paintings initially resonate a professional quality and visual intrigue, after spending enough time with them, I am ultimately dissatisfied by their predictability. I am disappointed at Close’s unwillingness to venture into unexplored territory.

With a name like Chuck Close, he has earned the right to go anywhere and do anything in art. But he has stuck to the same formula he developed about 30 years ago, creating slight variations of the same idea, churning out paintings using the same ingredients to represent persons' faces. The easy defense is to point to his physical condition and conclude it is amazing enough that he can paint at all! But I'll bet Close is not looking for sympathy when it comes to artistic creation; he can handle unadulterated criticism.

An analogy can be made to the invention of the camera: Prior to its invention, western artists became famous by painting in a realistic style. When the camera and film were invented in the 1880s, many people jumped to the conclusion that painting had become obsolete. But the true artists met the challenge and proved that painting need not be photo-like, thus resulting in impressionism and post-impressionism (e.g., Monet, Seurat, and Van Gogh), paving the way to subsequent movements of the 20th century.

In the contemporary world of Chuck Close, the ease and availability of digital imaging has disturbed and challenged the originality of his painting style. To Close's defense, a painting is not an image - it is an object, and Close's paintings are painted by hand and imperfect, as a painting should be - grander in scale, dwarfing most digital images. Nevertheless, Close has done little to respond to the challenge, to discover new terrain, appearing happy to follow an accepted formula and be pinned as the guy who does those big gridded portraits.
Posted by Lucas Novak at 6:56 AM