The practice of an artist requires that he study what others are creating in order to compare his own work and art theory to others. It allows the artist to understand current trends in the art world while also getting a sense of the regional art market.

This is not to say that the stuff currently displayed in galleries is good art or what needs to be followed, since galleries are in it for the business, and the driving force behind capitalism is not directly related to quality product. And those who can afford to collect art - those driving the market - are not always people with good taste in art. Nevertheless, just like any industry, it is important to study the work of others in the field, as it is the essence of how society develops and advances, the stepping stones and building blocks to new ideas, precedents, and ambitions.

I recently visited Bergamot Station in Santa Monica at the "30 open doors" shows, where the community of art galleries participated in art openings showcasing the work of dozens of artists. Certainly with the crowds of people and walls teeming with art, there was a lot to sift through, some worth seeing and some worth ignoring. I documented some of the work that made an impression on me.

Work that caught my attention conceptually was that of Milton Becerra, a Venezuelan born artist, at the Latin American Masters Gallery. I interpreted his work as addressing physics, matter and the universe, a network and connection of space and time. In his installations, he uses gravity, strings and stones, creating geometric planes within a space (the strings) connected to centralized matter (the stone). The work prompted me to question energy and physics, and I pondered this relation to ongoing contemporary scientific studies with the Hadron Collider, studies that will theoretically "take physics into a realm of energy and time where the current reigning theories simply do not apply."

Here is a picture of a portion of Becerra's work: 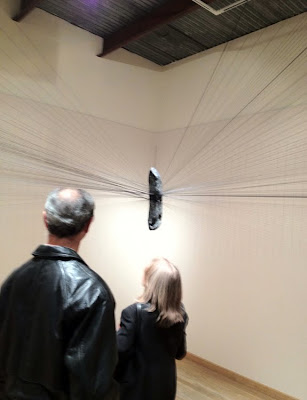 As I continued into another gallery, I stumbled upon a painting by Dan Quintana, a local artist living in Redondo Beach. While probably all of the work in this particular gallery would be written off as "low brow", Quintana's painting intrigued me by its craftsmanship - I admired his crafting a group of flawless images with vivid colors. So many times artists attempt to take a similar route and so easily fail. Although not a very intellectually thought-provoking work of art (which in the long run will prove its demise in artistic standing), like a centerfold, Quintana's piece stood out: 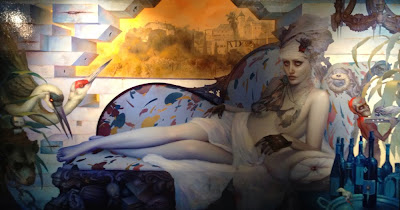 With respect to other paintings, Richard Heller Gallery exhibited some work by Spanish artist, Paco Pomet. His monochromatic wet into wet techniques, along with thick layers while still showing blank white canvas in certain areas, created dialogue among the viewers. Here are some examples of his work: 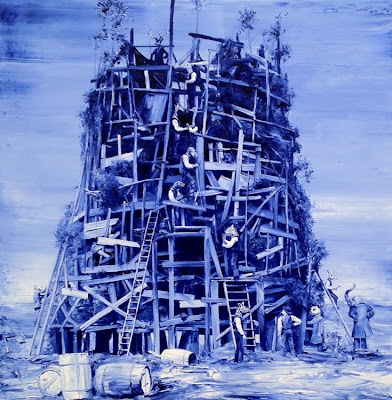 I enjoyed Pomet's work for the sake of "how" he painted it (shades, composition, texture, shape, line, etc.). But my biggest criticism is that some paintings seemed too obviously concerned with subject matter or wanting to reference pop culture. This caused them to feel as if they lacked confidence in the "how", thus attempting to compensate in the subject matter by including references to familiar characters. For example, a unique monochromatic representation of a rural laborer was ruined by the inclusion of Yogi Bear peeking from behind a tree in the background, as if Yogi had been included as an afterthought. This implied that the subject matter was more important than the "how", when it should have been the other way around.
Posted by Lucas Novak at 5:32 AM