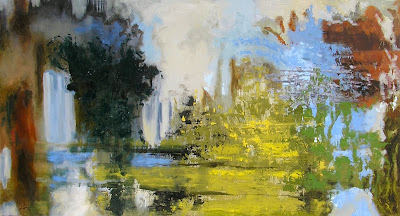 For over 50 years some critics have said that painting is dead. But painting is probably the most difficult of all forms of art -- it is a person's soul depicted in a single frame. The entire body of work can be dismissed with a single glance. As more and more people desire to be artists, more and more mediocre paintings dilute the field. Some of these people realize they are not painters, so they dabble in new media, such as video art, a nascent medium yet to develop a list of masters. Painting, on the other hand, has its list, quite an extensive one from over the centuries, thus establishing the highest level of artistic standards. Pablo Picasso, on his deathbed in 1973, said, "Painting remains to be invented." Painting is not dead. It just takes someone like Picasso to show people that painting is still alive!
Posted by Lucas Novak at 11:33 AM