Returning to the law paintings series, this painting is a reference to the contemporary lawsuit, Cariou v. Prince, et al., in which Lawrence Gagosian (international art dealer) is also a defendant sued for copyright infringement.

Affixed to the wood panel is a portion of the published opinion from the United States District Court, Southern District of New York, containing stinging language in its holdings, including "the Gagosian Defendants were well aware of (and capitalized on) Prince's reputation as an appropriation artist who rejects the constricts of copyright law, but they never inquired into the propriety of Prince's use of the Photos." 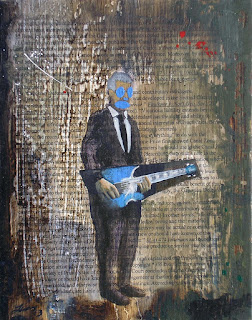 While Cariou earned practically nothing for his photographs, Richard Prince was the artist who appropriated them without any permission, altered them slightly, and sold about $10 million worth through Gagosian Gallery. Hence the lawsuit.

The District Court held both Prince and Gagosian liable for copyright infringement. The case remains on appeal.
Posted by Lucas Novak at 8:00 AM