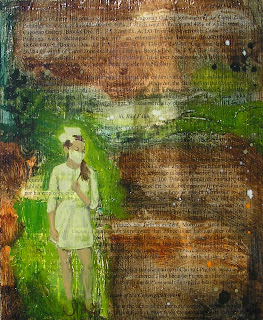 "Prince's bad faith is evident," concluded the judge for the United States District Court, Southern District of New York in 2011. Returning to the law paintings series, this painting is another reference to the contemporary lawsuit, Cariou v. Prince, et al., in which internationally acclaimed artist, Richard Prince, was sued for copyright infringement. Prince appropriated Patrick Cariou's photographs without permission, altered them slightly, and sold them through Gagosian Gallery.

This painting incorporates a portion of the Court's opinion and facts of the case; for example: "Gagosian Gallery sold eight of the Canal Zone Paintings for a total of $10,480,000.00, 60% of which went to Prince and 40% of which went to Gagosian Gallery." While Prince was sued for appropriating Cariou's work, I have appropriated one of Prince's famous nurse paintings here. I do believe, however, that the "fair use" defense to copyright infringement better applies to my work than it does to Prince's in the Cariou lawsuit.