Philadelphia Museum of Art: A Review of the Extraordinary and Observation of the General

In my return to the Philadelphia Museum of Art, my spirit mimicked Rocky's triumph as I spent the day exploring the dozens of different rooms instead of sitting in traffic in Los Angeles. I was, however, hoping for a larger collection of contemporary art, but I'd wager museums like this one are hesitant to display much contemporary work until the art has aged and proved to survive the decades. Nevertheless, this museum is an inspirational place, full of extraordinary works from over the centuries and around the world. And while this post is an attempt to understand and describe what I found to be inspirational in my quest, my observation of the other viewers at the museum also gave me insight into the world of art. 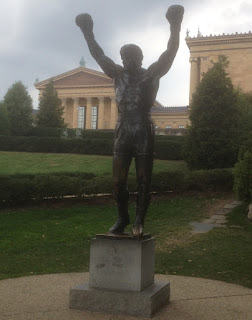 It seems that the general public wants to be sure they can like an artist, and in doing so they look for clues such as conservative subject matter, an art degree, or an artist's ability to draw realistically in the traditional western style. To the general public, these are easy guidelines to rely on when determining what artists are likable. But these guidelines are human fabrications, and while guidelines are good for a functional society, they don't necessarily transfer over to good art.

People want structure in life. They want security. Generally, when the general public observes art, they prefer to see objects that they can imagine putting on their walls at home. But their homes are places of structure, security, and refuge. Most people want to decorate their homes and create comforts, and maybe this is a reason why the most trafficked areas at the museum were around impressionist and post-impressionist paintings (Monet, Renoir, Cezanne, Van Gogh, etc.) of gardens, flowers, boaters, pleasant women, and beautiful landscapes.

In the practice of law, indeed it is structure, logic, and reasonableness that are important. These are important in almost all aspects of society but often erroneously carry over to art appreciation. Humans are more complex than these artificial constructs and institutions, and art must therefore not be inhibited by such falsities.

Many successful artists have broken free of structures in creating work representative of the human condition. Museums continue to fill rooms with strange works that contradict feelings of warmth and safety of the home. Picasso was a great artist because he led the charge in tearing down certain walls and crossing boundaries with his wide range of inventing new styles. The viewer must also free himself of shackles. Painting must not be judged by its ornamental qualities.

The most obvious reaction I perceived came from a guy at the Cy Twombly room, located off the very end of the hallway of the "Contemporary and Modern Art" wing. Cy Twombly (1928-2011) was known for creating huge canvases covered in scribbles and scrawls using crayons and graphite. As I walked down the hallway toward the room, a guy was walking with a woman next to me. He said to her, "Let's see if there's anything else down here." He paced to the end of the hallway and glanced into the Twombly room, frowned, and immediately said: "No, there's nothing down here." And they left.

I kept walking and entered the room solo: 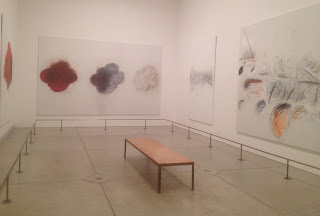 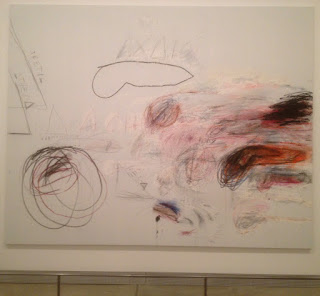 I'm not writing this attempting to defend Twombly's work as good art, but I was more interested in the stranger's lightning quick decision to disregard the entire room before even setting foot in it. The graffiti-like scribbles did not conform to his traditional notions of what a painting should be, so he basically gave it the middle finger and stormed off.

Certainly museums would bore us to death if everything in it was an impressionist painting. What I appreciate about Twombly's work (perhaps symbolized by its location in the last room at the very end of the hallway) is that it sits at the end of the spectrum of the norm's expectation of what a painting should be. In that regard, his work is similar to the famous Fountain, by Marcel Duchamp, also at the Philadelphia Museum: 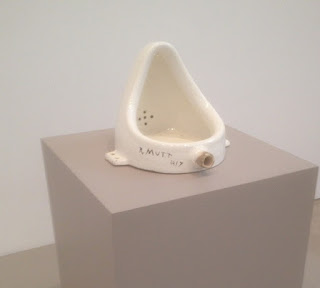 As mentioned above,  the "Contemporary and Modern Art" wing didn't actually exhibit much contemporary art in my visit, but the museum did have a large room full of paintings by contemporary artist Sean Scully. I was previously unfamiliar with his work, but these giant paintings, created within the last decade, immediately captured my attention: 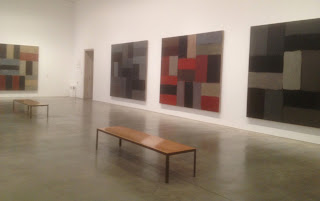 While the idea of rectangular fields of color reminded me of Rothko, the number of fields juxtaposed in two or three vertical or horizontal groups, almost like national flags, in varying shades, tones, and hues, resonated like a piano composition. 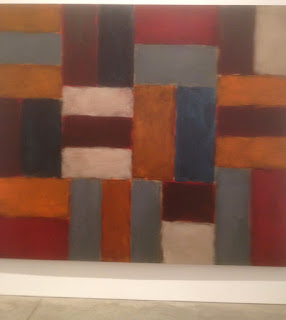 From a distance, the paintings may appear to merely consist of rectangles, but upon closer examination of the surface, more is to be discovered in the layers of paint and process of creation. The color fields are not flat; they are layered with soft and blurred edges, and they exemplify effective use of gray and mud-color in making others appear more vibrant. This is the stuff that ignites my fire: 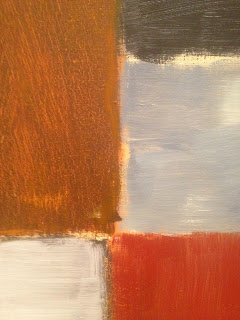 Moving along to the rooms with old European paintings, I searched for the museum's revered Rubens, but when I found it, although masterful, my attention was drawn to a different piece in the same room, a large painting (approx. 6 feet x 10 feet) by Pacecco de Rosa from the year 1640, Massacre of the Innocents: 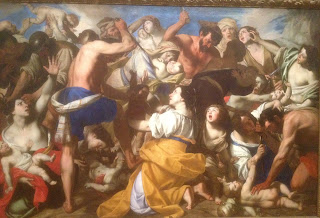 While this dramatic biblical theme could be considered typical of Baroque art from that time period, this gruesome scene of murdering babies, detailed with blood, tears, and gray flesh, really is disturbing, perhaps one of the most shocking paintings I've seen: 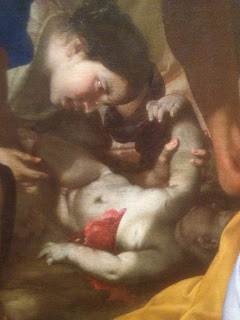 But beyond the subject matter, the painting is perfect in its composition, lighting, facial expressions, surface texture, and switch between fine detail and wide brush strokes: 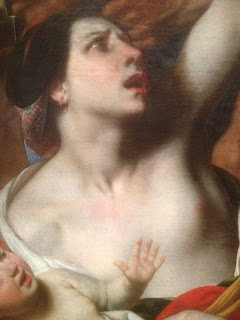 Further on the topic of religious themes, and in an effort to not write an entire book on my visit to the Philadelphia Museum of Art, I will conclude this post with a work from the Asian art section, a room from 16th century India dedicated to the Hindu god Vishnu: 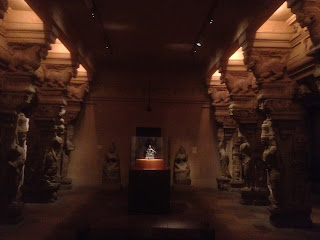 Each pillar was created with its own unique stone carving of deities and lions. Together as a whole, with the dim lighting and centuries-old stone simultaneously depicting detail and deterioration, the artwork instills feelings that a higher power is present. 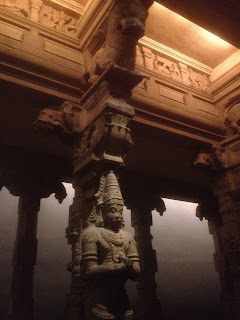 When I left the museum, I walked back to my hotel in the rain. I didn't have an umbrella, my brain was exhausted and my eyes were tired, but it didn't matter. While the art at the museum is undoubtedly inspirational, it is not impossible. Salvador Dali once wrote that "Before all else, it is absolutely necessary that at the moment when you sit down before your easel to paint your picture, your 'painter's hand' be guided by an angel." Since we're all equals on this planet, this shouldn't be a problem.
Posted by Lucas Novak at 7:45 AM