I recently came upon a random billboard in Los Angeles which caught my attention and had me thinking about what art is: 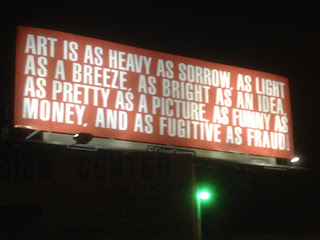 What does it mean that art is as fugitive as fraud? Is it, for example, when we hear that a Picasso painting that he probably completed in a day or two sold for over $50 million at auction? Is it a reference to the billionaires who create art icons to use as status symbols?

My latest painting is depicted below. The computer screen hides the painting's real texture and size. The painting cannot be replicated digitally. And the color calibration of your monitor varies from computer to computer, so the colors you see may not be precisely what the painting is.

But I strive to make every painting unique in its own way, using only high end materials. They are not copies, and a print is inherently different from the original. The original is a product of tension, torment, conflict, hardship, study, cognition, confusion, understanding, love, empathy, and passion, completed over the course of about six to eight weeks, sometimes less, sometimes more. 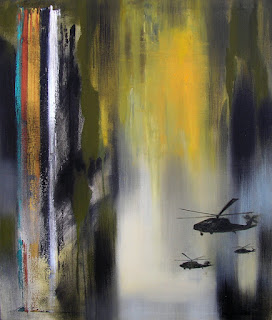 At what point does art become fraudulent?

Richard Prince is a contemporary artist, internationally renown, with a name that almost always has its place in contemporary art books. He's what is called an appropriation artist, using the work of others, adding a new twist, and putting a price tag of a million dollars. The following piece, for example, shows an original photograph on the left of a Rastafarian man, taken by photographer Patrick Cariou. On the right, however, is Richard Prince's appropriation of it, a work of art which sold for about $1 million! 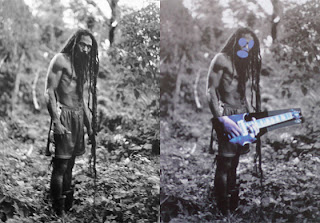 Yes, $1 million, according to testimony by Prince after being sued by Patrick Cariou for copyright infringement. Cariou has copyright ownership in the photo on the left which basically means he owns the exclusive right to reproduce the photo, including the rights to its dissemination, display, and to create derivative works from it. Yet Cariou earned practically nothing for this photograph compared to the fortune earned by Prince in the appropriated artwork on the right.

Prince never received any permission from Cariou to use the photo, but his defense is that the Fair Use exception applies.

The goal of copyright, to promote science and the arts, is generally furthered by the creation of transformative works. Copyright law recognizes that artists are often influenced by others and use what others have created in order to build on it to create something original. An example is with Eric Clapton or Led Zeppelin appropriating rhythms from American delta blues to create new songs. Public policy views giving artists the freedom to build upon what others have created as progress for society, and therefore the Fair Use exception exists in copyright law. But there are requirements which must be met:


Without turning this post into a memorandum of points and authorities, in determining whether the use made of a work in any particular case is a fair use, four main factors are considered:

(1) The purpose and character of the use, including whether such use is of a commercial nature or is for nonprofit educational purposes: The central purpose of the inquiry into the first factor is whether the new work merely supersedes the objects of the original creation or instead adds something new, with a further purpose or different character, altering the first with new expression, meaning, or message. The more transformative the new work, the less will be the significance of other factors, like commercialism, that may weigh against a finding of fair use.

(2) The nature of the copyrighted work: Basically, to consider whether the protected work is of the creative or instructive type -- a distinction that has emerged in the decisions evaluating the second factor is whether the work is expressive or creative, such as a work of fiction, or more factual, with a greater leeway being allowed to a claim of fair use where the work is factual or informational.

(3) The amount and substantiality of the portion used in relation to the copyrighted work as a whole: This inquiry focuses on whether the extent of the copying is consistent with or more than necessary to further the purpose and character of the use.

Applying the factors of Fair Use to Prince’s appropriation of Cariou’s work I will leave to the Courts (the Cariou v. Prince lawsuit has not yet resolved and remains on appeal). But a glance at the art reveals much: Cariou’s entire picture was used by Prince, as Prince added a few dabs of blue paint and a guitar.

Dear Reader, what do you think? Has Richard Prince defrauded the art world? Should he be entitled to walk away with the millions of dollars he earned appropriating Cariou's photos or should Cariou be entitled to Prince's earnings?
Posted by Lucas Novak at 5:00 AM