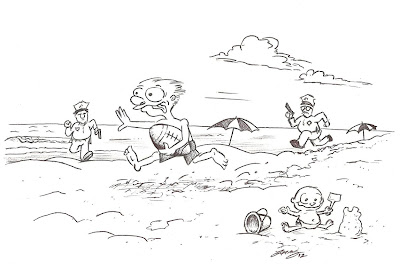 The County of Los Angeles recently lifted an all-out ban on playing with footballs and frisbees on the beach, allowing for beach-goers to toss balls on beaches in Los Angeles County during the winter off-season.

But the only thing this really does is bring to everyone's attention that a law actually exists which prohibits them from playing with balls on the beach during the rest of the year! Most people, me included, had no idea there is actually a "ball playing restriction". Apparently, when you go to the beach, you're supposed to sit there like a mannequin.

County Code section 17.12.430 provides: "It is unlawful for any person to cast, toss, throw, kick, or roll any ball, tube, or any light object other than a beach ball or beach volleyball upon or over any beach..."

With the ongoing budget crisis in California, I find it hard to believe that government money will actually be spent enforcing this law. On the other hand, now everyone is actually aware that the law exists. So, Los Angeles residents, once June rolls around, watch out for the cops when you go to the beach. Or make sure to play all your football games with a beach volleyball! But don't expect to be seeing Johnny Utah.

Thank you for following the Doodle of the Day and the paintings, sculpture, drawings, works in progress, reviews, and other art by Los Angeles artist Lucas Aardvark Novak :) To see older blog posts and other doodles, click HERE.
Posted by Lucas Novak at 6:39 AM