Yesterday I posted Part 1 of this review of the work of Matthew Ritchie and Daniel Richter, two well-known artists of the international contemporary art scene who recently exhibited their work in Los Angeles. Continuing the comparison...

More interesting than the subject matter, however, is how he completed the paintings, such as the numerous applications of layers. Many of the paintings are an adventure of complexities leaving much open to interpretation and completion by the viewer: 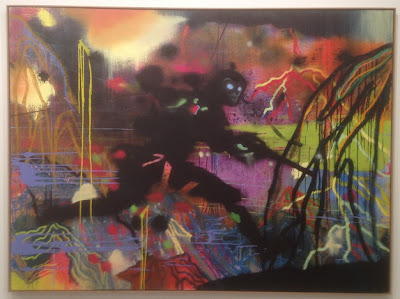 At times, however, the cohesiveness of the overall picture is broken by the combination of abstractions, flat shapes, and drippings of color. Richter’s relentless addition of abstract shapes and drippings can get overbearing. Each shape and color loses its power and effect from the maze of numerous other haphazard shapes and colors, as if Richter’s trying to prove sophistication by the sheer number of brushstrokes or applications of paint. Perhaps Richter could benefit from a reminder of the famous quote by Leonardo da Vinci, that “Simplicity is the ultimate sophistication.”

Maybe his work would be more effective had he wholly committed to the maze of numerous haphazard shapes and colors (Jackson Pollock-like). But Richter attempts to simplify the chaos and bring form to the abstraction by representing human forms through flat applications of black paint: 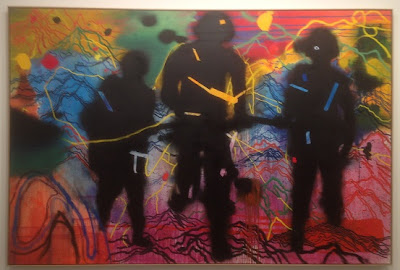 The flat black, however, sometimes feels too heavy and not in harmony with the rest of the picture, as if the black shapes are mere cut-outs, pasted onto the canvas after filling it up with abstract shapes and drippings. And, in anticipating the problems with the flat black shapes, he made sure to use overly bright and vivid, almost fluorescent, drippings and swaths of color: 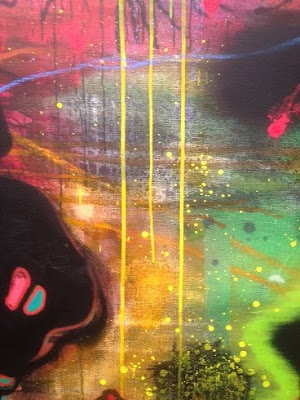 To me, the bright colors in the drippings and abstractions are too artificial, maybe even decorative and kitsch for such dark themes of war and corruption in politics. I sensed that Richter wanted to comment on such dark themes, but in doing so felt he needed to include very bright colors to holler for the viewers’ attention.

But bright colors do not inherently carry better principles than grayed colors. The impact of any color depends on what is next to it. The attention immediately gained by a collection of bright colors is merely superficial. It is similar to a pop song on the radio that is immediately catchy to the ear but quickly gets boring because of its lack of depth.

It perplexed me that Richter chose to go overboard with the bright colors, mainly because his past work of similar dark motifs does not rely on bright colors as a crutch. It could be that Richter, being from Germany, has the idea that the majority of the Los Angeles crowd, indulging in materialism, suffers from such short attention spans that bright colors are required in order to compete for their attention. Perhaps he’s on to something...

Stay tuned for Part 3 of this post, comparing the similarities and differences of Ritchie’s and Richter’s work.

Thank you for following the reviews, paintings, creations, sculpture, drawings, works in progress, Doodle of the Day, and other art by Los Angeles artist Lucas Aardvark :) To see older blog posts click HERE.
Posted by Lucas Novak at 5:48 AM