Doodle of the Day - Close Encounters of Another Kind

The Large Hadron Collider is a high energy particle collider, a tunnel that loops around in a circle about 17 miles in circumference, where opposing atomic particles are set to collide to create enormous patches of energy. The project includes an international team of physicists and engineers, and it supposedly explores deeper the principles of matter, the Big Bang Theory, and origins of the universe. Time travel is thus implied but not stated.

Like computers, televisions, phones, or engines, when many machines are first invented, they are rather large and bulky, and over time certain modifications to the technology allow them to fit in our pockets. Should the Large Hadron Collider one day be mastered, then reduced from a 17 mile circumference to something like a 17 meter circumference, maybe it will become the lifeblood of the infamous saucer. 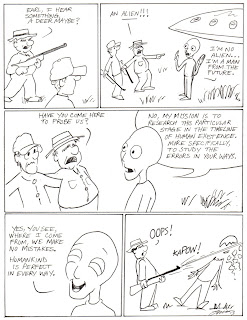