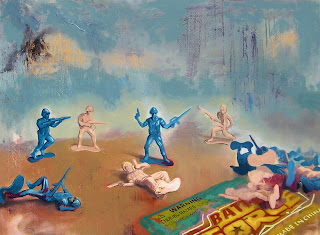 I wonder why, for generations, children have been given toys representing violence, or taught sports symbolic of war. Perhaps it's simply a representation of the primitive struggle to survive.

But I recently listened to a talk by Dr. Jeremy Jackson, senior scientist at the Smithsonian Institution and professor at Scripps Institution of Oceanography, about the current condition of the oceans. The level of destruction is frightening, especially the effects from overfishing, sewage, and acidification from pollution in the atmosphere.

One quick example: overfishing and pollution has resulted in the rise of slime. As a result of nutrient pollution from sewage and agriculture, the population of phytoplankton has increased, and continues to increase, because of overfishing of shellfish that once ate phytoplankton. The phytoplankton eventually die of old age and sink to the sea floor where they decay, forming a slime and suffocating all other life such as coral, by using up the oxygen. This has created gigantic "dead zones" around the world now dominated by microbes and jellyfish.

We can sit on cliffs in Malibu, stare at the vast ocean horizon and pacify ourselves by thinking the oceans will always be big enough to sustain us, but this is the equivalent of sweeping our dirt under the rug. If we keep sailing into the sunset, we do not plummet off a flat plane -- the world is round, and humanity has globalized it. And the oceans are not merely a source of food -- they directly affect us on land, by the amount of oxygen in the air or by rising over cities like New Orleans or Miami.

Continuous economic "growth" is unsustainable, yet I wonder what it will take to make major changes. It raises the question: Are humans inherently destructive?

To see other blog posts, click HERE
Posted by Lucas Novak at 8:00 AM