The Monsters At LACMA, And Chris Burden Art Review

The Inexplicable has prevented me from creating anything worth a damn lately. Maybe it's them dog days of summer that has my bones in a rut. I tried fighting it by going to a couple Los Angeles art galleries for inspiration, but the energy (or lack thereof) in the ones I visited simply got me tired. (On that thought, I wonder if a gallery kept a constant flow of pure oxygen into the display rooms, would this hype people up and increase sales even if the art sucks?)

In another attempt to lift my creative spirit, I decided to visit Los Angeles County Museum of Art. I probably should have started here. It's right down the street anyway. When I arrived to LACMA, I stared at the monstrous fossils of a mastodon in a tar pit just outside the building. When I left LACMA, I sensed that the dog days may be passing... 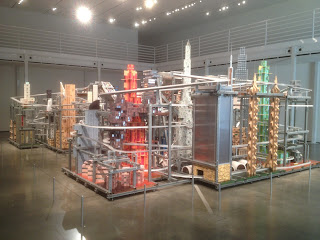 Chris Burden's Metropolis II is currently on display at LACMA in the Broad Contemporary Art Building. Burden is a Los Angeles artist with international recognition, probably most famous locally for his sculpture, Urban Light, a collection of 202 vintage street lamps tightly positioned in a grid at the entrance of LACMA.

Metropolis II represents a 21st century city and includes 1,100 custom designed cars, 18 highways, and a range of buildings and structures made of various materials. The vehicles and trains actually move, and apparently, every hour 100,000 cars circulate through Metropolis II.

My first impression of the work reminded me of when I was a kid building my own tracks and environments with Hot Wheels cars or model trains, creating trees out of construction paper, building mountains out of cardboard, and using GiJoes to tear the place apart. What a joy it must've been to be Chris Burden creating this sculpture. But once I got past the "fun" of imagining the creation of the artwork on such a grand scale, I began to focus on the concept. 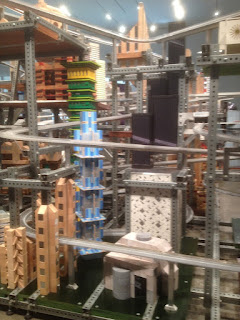 Metropolis II is a simple idea portrayed in all its complexity -- today's bustling city of roads, buildings, highways, speed, and noise. While it is unclear to me whether Burden himself embraces or rejects the 21st century city, his model reminded me of a title of a famous painting by Paul Gaugin: Where Do We Come From? What Are We? Where Are We Going?

I don't recall seeing one bush, one tree, or one natural living thing in Metropolis II. In the entanglement of metal beams, structures, and mechanisms, all we see is a mess of human fabrications. The natural world has been forsaken in the 21st century. Yet the piece as a whole resembles a living being with organs and a circulatory system. It is a giant monster... 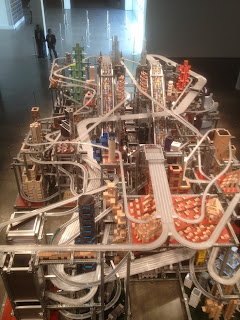 On the topic of monsters, other art at LACMA that inspired me could also be categorized as extraordinarily frightful. The following are images of a skull rack sculpture and a memorial figure created by the Kerewa people of Papua New Guinea in the early 1900s: 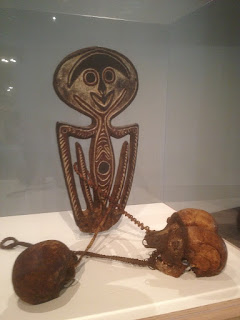 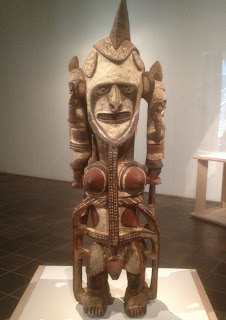 While this Kerewa art may be considered hideous or grotesque, they possess the real, the truth, yet they convey the idea of supernatural powers. These were not forced creations, nor were they created for an art market. They were created based on passionate beliefs in life and death, and it shows.

And when I moved on to see some paintings, my attraction to the monsters continued... 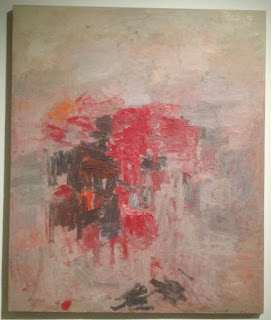 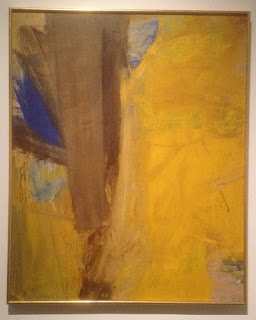 The first is by Philip Guston and the second is by Willem de Kooning. Each artist is classified by art historians as abstract expressionist painters of the mid 1900s. In the choice of color and thick swaths of paint, these paintings are morbid, but when I came upon them, I stopped and stared. Something about the morbidity seemed natural.

Perhaps it was my mood, but I can't explain why I tended to gravitate towards the monsters. It seemed to be the theme for me, as these were the artworks I found to be inspiring. Maybe a byproduct of the Torment? I don't know.

Oh, and by the way, the most overrated piece at LACMA? Andy Warhol's tomato soup can. It's stupid.

Thank you for reading about the paintings, sculptures, drawings, works in progress, reviews, Doodle of the Day, and other art by Los Angeles artist Lucas Aardvark Novak. To see older blog posts and other doodles, click HERE :)
Posted by Lucas Novak at 8:11 AM