The Triumph of Painting: The Failure of Burgin's Concept 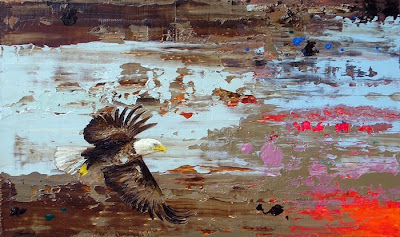 Conceptual artist and Yale MFA graduate, Victor Burgin, gave up painting in 1965, declaring it an outdated technology, ecologically unsound, a form of pollution. About fifty years before him, Marcel Duchamp had given up painting as a stupid, despicable activity. Yet, not long after Duchamp gave up, in 1937 Pablo Picasso painted Guernica, and on his deathbed in 1973, declared: "Painting remains to be invented."

If painting was an outdated technology in the 1960s, certainly it would be today. But over forty years since Burgin's analogizing painting to garbage, millions of people continue to visit museums to see paintings, including contemporary paintings. Either humans have an innate attraction to filth, or Burgin's judgment was contaminated by the structures of academia, including the political movements of the time.

People have been painting and viewing paintings since cave times. Maybe even before then. But Burgin, like many others, made a voluntary effort to prove that painting was dead. It could be interpreted that Burgin was announcing that his place in the history of human existence was so special, that he might as well have given himself the title: Painting's Angel of Death. But by now it is probably safe to assume he does not hold such a rank - perhaps because his academic philosophy was directly contrary to intuition and the involuntary reactions garnered by viewing a painting.

Burgin failed to realize that painting is not based on reason, and the viewers' reactions are not derived by logic. Rather, humans have a natural need to create. With that comes the ability to intuit when experiencing a form of art such as painting, having an immediate perception and reaction, be it positive or negative. Painting is a physical activity of the mind, eye, hand, and heart, and it is one of the ways an individual can attempt to comprehend the incomprehensible.

Painting has primitive roots, just like hunting, dancing, and music. And because humans will always be attempting to bring an organic sense of completeness and natural order to an otherwise complex society of new media, information and technology, painting will live on forever.
Posted by Lucas Novak at 4:29 AM